skip to main | skip to sidebar

Editor's Note: Autumn Acres, published in 1982, mostly was composed "during the so-called Golden Years, when one has considerably more to look back on than to look forward to," dad wrote in the introduction. "If a reader, here or there, should happen to glean a grain or two of wheat from all the chaff and tares, so much the better!"

The Constitution guarantees
A right to you and me:
The right to speak out freely
Any time we disagree.

If you see things a different way
Than I do, that is fine.
For you have your opinion
Just the same as I have mine.

You and I may disagree
And often be divided,
For this event, the very first
Amendment has provided.

I can't deny your basic right
To speak without restrictions,
And you're as free as you can be
To stick to your convictions.

I cannot fail to keep in mind
This country is a free one.
If you must be a stupid ass,
You have the right to be one! 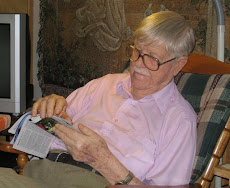 Growing up on a small 50-acre farm in southwestern Ohio back in the 1950s, I learned the value of honesty and a strong work ethic from my parents. Of course, I didn't appreciate it much back then -- what teenager wants to clean a room, mow an acre or so of front yard or paint the boards in the rail fence my father built (even if he did agree to pay me and my best friend Marcia 5 cents a board to do it)? All I knew was that my mother spent most of her time cleaning the house, tending to her beautiful flower gardens and conjuring up home improvement projects for my dad to complete when he wasn't doing something else.

The "something else" included a full-time day job as a tool-and-die engineer (later on as the manager of an entire plant). Until he retired, he had several different jobs, a couple of which required an hour's drive one way. He and my mother operated an evergreen nursery at our farm, so that meant they spent endless hours planting and cultivating. In between all that (and doing my mom's remodeling projects), dad managed to earn a law degree from a correspondence school and -- most important for the purposes of this blog -- transform himself into a sort of country bumpkin poet known as Slim Acres and later billed himself as "The Buckeye Poet." His real name, for the record, was Harold Asa Pickett.

"Slim Acres had a distinct personality," dad wrote in the introduction to Down Country Roads, his first book of poems. "He was a sort of combination of two genuine gentle bumpkins that I have known. One was an uncle of mine, born and raised in Tennessee, who could not write his name until after he married. The other one was a neighbor, also with a scanty formal education, but with a lot of common sense and wit. Both were as honest as peanut butter. Slim Acres embodied a few traits of each, and perhaps a little bit of me."

And his name? "I can't really say where his name came from, but it sounded fitting," dad wrote.

Slim Acres was "born" as a series of snippets titled "Slim Acres Says" submitted anonymously to the Times Gazette, the local newspaper in Union City, Indiana, such as:

The Golden Rule
Is easy fergot
If we'uns can git
What you'uns have got.

Those little ditties grew into years of being a popular humorous speaker at events ranging from club meetings to graduations throughout Ohio, Indiana and Michigan. But back in the mid-1930s, Slim's writing career got a boost Reader's Digest magazine published this poem:

Roses are red,
Violets are blue;
But they don't get around
Like the dandelions do.

In 1978, in his book Square Marbles, he revised this one just a bit:

Rose's are red,
Violet's are blue;
Jeanie's are pink,
With lace on 'em, too!

As he wrote and collected his poems, he published and sold them far and wide, starting with the flagship Down Country Roads. He drew heavily on his Quaker upbringing, his family, and of course, my mother -- the "Lucy" in his poems. Writing in Down Country Roads, he noted that there "is still something about rural life that is considerably different. It's hard to define, but it is there. It's a certain something that makes country people just a little bit friendlier, a little bit steadier, a little bit happier. Maybe it's the clean, fresh air; maybe it's the lack of confinement; perhaps the cooing of doves on a dewy morning, or the clear, starry skies on a winter evening: Perhaps a thousand other factors all put together."

He kept on writing: Shortly after his 80th birthday, he published what would be his final book, simply titled Eighty After Eighty. My mother passed away in 2000, and after something like 60 years of marriage, dad simply didn't want to live in a house by himself. So, he moved to the Brethren's Retirement Community in Greenville, Ohio. There, he continued to write poems -- even winning a state award for one of them -- right up until a week or so before his death on June 24, 2009, at the age of 96. Now, one of his sisters, my Aunt Olive, is continuing his tradition of having a poem in each issue of the home's newsletter, "Fanfare," by choosing one or two from his books to be published posthumously.

Lest I forget, there's one interesting note about that Reader's Digest poem: When it was accepted for publication, dad had a choice of a small cash payment or a "lifetime" subscription to the magazine. He chose the latter -- and it's pretty clear that the more than 60 years of magazines he received for free put him ahead of the game by far.

And so it is that I, too, wanted to keep the memory of his poetry alive. Lots of folks know him, be it by "Hap," "Harold" or "Slim." I've never heard anyone speak an unkind word about him, and I can count on the fingers of one hand (with a few fingers left over) the times he ever uttered a negative word about another human being. At his heart, he remained a simple, honest man for all of his 96 years -- a man I'm proud to have called my "Pop."

Hopefully, others will get to know him through this blog. My intent is to start with a couple of my favorite poems, adding a new one each week for, well, who knows how long? One thing is certain: I've got plenty of material. If you like what you read, please drop me a line!

Also, since I've been asked about whether copies of Dad's books are available, the gift shop at the Brethren's Retirement Community in Greenville has a stash of the Eighty After Eighty paperback that we donated after he passed away. I believe the book is selling there for $5, and the profits are put to good use helping residents in financial need. I also have a number of copies here at home -- I'll pack one up and mail it to anyone who's interested for $10 including postage. This is the only book for which multiple copies exist as far as we know.